Chris Carr has served as Georgia’s Attorney General since 2016 with a mission of protecting Georgians’ lives, livelihoods and liberty. 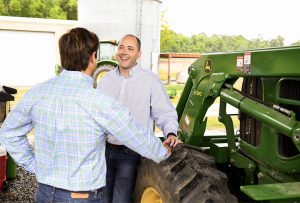 Chris was appointed Attorney General in 2016 by Governor Nathan Deal, and in 2018, he was elected statewide to a full, four-year term. Chris is now seeking reelection in 2022 to another four-year term.

Chris works every day to protect Georgians, and his creation of the state’s first-ever human trafficking prosecution unit has already resulted in convictions and lengthy prison sentences for human traffickers, indictments of those who are buying and selling children for sex, and the rescue of more than 100 underage victims.

This year, Chris secured funding from the Legislature to create the state’s first-ever gang prosecution unit to go after gang members committing violent crimes across our state. In 2018, Chris also launched the Georgia Anti-Gang Network, bringing federal, state and local law enforcement and agency heads together for the first time to combat our state’s growing gang crisis.

Chris worked to keep Georgia’s economy open during Covid. He knows the importance of maintaining Georgia’s stable and reliable legal and regulatory environment so that businesses can thrive.

As Georgians pay skyrocketing prices at the gas pump, Chris has pushed for energy independence and fought back against Biden’s attempts to shut down oil production in the United States. Chris joined lawsuits against Biden’s cancellation of the Keystone pipeline, against Biden’s moratorium on oil/gas leases and drilling permits, and against Biden’s use of the “social cost of carbon” in the certification process for natural gas development.

In protecting Georgians’ liberties, Chris has fought back against egregious federal overreach from Washington, including Biden’s vaccine mandates and Biden’s demand that the FBI conduct surveillance on parents who challenge their local school boards. Chris has also fought strenuously to protect Georgians’ 2nd Amendment rights and to protect the rights of the unborn through his vigorous defense of Georgia’s Heartbeat Bill in court.

Since Chris took office, his Law Department has prosecuted more than 60 individuals for Medicaid fraud and the abuse, neglect and exploitation of elderly Georgians. In addition, since Chris became Attorney General, his Medicaid Fraud Division has recovered $68 million in Medicaid fraud from people stealing money from taxpayers.

Chris has made combatting the opioid crisis a top priority and Georgia is now poised to receive more than $636 million for desperately needed treatment because Chris initiated legal action against the bad actors who contributed to this crisis.  Chris also created the Statewide Opioid Task Force, which has been praised as a national model and includes more than 300 public, private and nonprofit entities working together to save lives in this fight.

As Commissioner of the Georgia Department of Economic Development from 2013 to 2016, Chris led the state agency responsible for creating jobs and investment in Georgia. Georgia was named the “No. 1 state for business” each of the three years Chris was commissioner. The department under Chris’ leadership helped facilitate 1,069 projects across the state that represented approximately $14.4 billion in investment and the creation of more than 84,000 jobs.

During his six years as U.S. Senator Johnny Isakson’s Chief of Staff, Chris advised the senator on federal legislation and on judicial nominees for the U.S. Supreme Court and lower federal courts in Georgia and across the country. Chris also served on Georgia’s Judicial Nominating Commission, the body charged with recommending candidates to the Governor to fill judicial vacancies, from 2011 through 2018.

Chris is a graduate of both the University of Georgia’s Terry College of Business and Lumpkin School of Law.

Chris and his wife, Joan Carr, have two daughters.